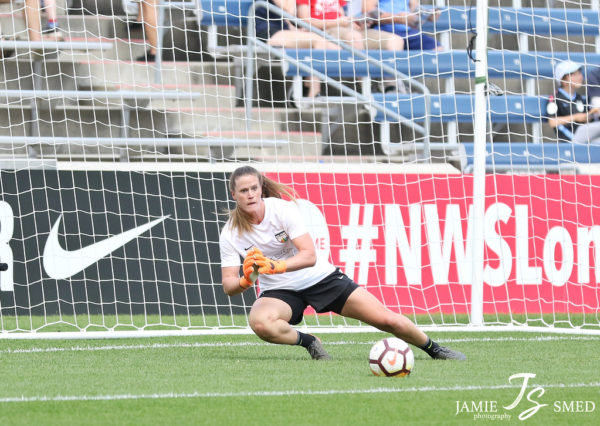 National team experience: Naeher has appeared in 46 games for the USWNT and has 24 shutouts. During the 2019 SheBelieves Cup, she (like each of the three goalies on the roster) played one of three games.

What I wrote in 2015: Naeher is the least likely player on the entire team to make it into a game. This isn’t a reflection on her, she’s a great goalie, but Hope Solo is a fixture in the net and Ashlyn Harris seems to be coach Jill Ellis’ second choice. Naeher’s path to playing would be a Hope Solo injury followed by a poor Harris performance. Seems unlikely. If called on Naeher could do the job. A tall goalie at 5’9″, Naeher is used to being called on in desperation. She won National Women’s Soccer League goalkeeper of the year in 2014 despite playing for the Boston Breakers, a team with a shaky defense that finished second to last in the league.

What to expect from Alyssa Naeher in 2019:  One sign that the USWNT is being treated seriously by the sports media world is that there’s an obvious storyline about it that’s getting emphasized beyond reason. That story is the absense of Hope Solo, who dominated the goalie position for the team for more than a decade. What will happen now that she’s gone? As the first choice goalie for the team, Naeher is inevitably a part of this story. She has to put up with everyone’s questions. Can she rise to the occasion? Can she be as good as Solo? To support these doubts, critics may point to what has looked like an increasingly shaky defense since Solo left and certainly more goals scored against. It must be incredibly aggravating. As a fan of the Boston Breakers (who sadly folded a couple of seasons ago), I got a chance to watch Naeher play in person. She’s great. She’s rarely out of position and when caught out can use her tall frame and enviable athletisism to compensate. She’s good distributing the ball to defenders. I truly can’t imagine her being anything other than completely solid. I have my doubts about this team’s ability to prevent goals being scored against them, but they lie with the field players, not the goalie.

Non-gendered personal interest item:  Okay, I guess this is pretty cool – USA Today (of all organizations) released an augmented reality game where you get to pretend to be Alyssa Naeher and try to stop penalty shots. Just make sure you clear that heirloom lamp out of the way before you try it…