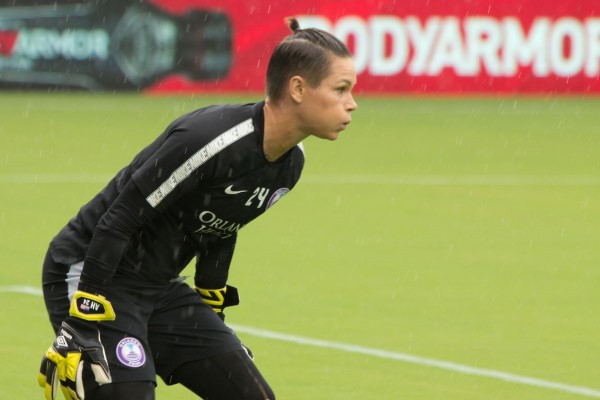 National team experience: Harris has played 14 games with five shutouts. During the 2019 SheBelieves Cup, she played (like each of the three goalies) one full game.

What I wrote in 2015: Harris is everything you’d expect from a world class goalie. She’s aggressive, fearless, determined, and a little bit obsessed. At 5’9″ she’s got the physical ability and presence to command the area around the net. Harris would be the starting goalie for virtually every other country in the world but unfortunately for her, she’s stuck behind goalkeeping legend, Hope Solo. When Solo was suspended this winter, Harris got her chance to start and played well, cementing her position as the second goalie on the team. If Solo gets injured, Harris’ experience will come in handy. Get it, handy?

What to expect from Ashlyn Harris in 2019: Ashlynn Harris is probably going to sit on the bench for the next month and watch her team as they, hopefully, lift the trophy as repeat champions. She’s the second string goalie on the team and it’s unlikely that coach Jill Ellis will chose to rotate goalies, although she did just that during the SheBelieves Cup earlier this spring. If Harris does get into a game because of an injury or poor performance by Alyssa Naeher, she will perform admirably. Honestly, I don’t know how Ellis chose Naeher over Harris. It must have been a close choice. If anything, Harris is a smidge more acrobatic than Naeher. When Naeher goes up in a crowd of players, you get the sense that she’s fearless because she’s too strong to be scared. When Harris does it, it looks like she’s fearless because it simply has never occurred to her to be scared. That’s a classic goalie attitude! For a “break in case of emergency” option, I can’t imagine one better than Harris.

Non-gendered personal interest item:  Harris is as fiery off the field as she is on the field. Somtimes that fire gets channeled into her work with her nonprofit, To Write Love on Her Arms. Sometimes it comes out in post-game press conferences where she leans into her coach or blasts her teammates for not caring enough. Seeing both sides of an athlete like that really makes me what to root for them!