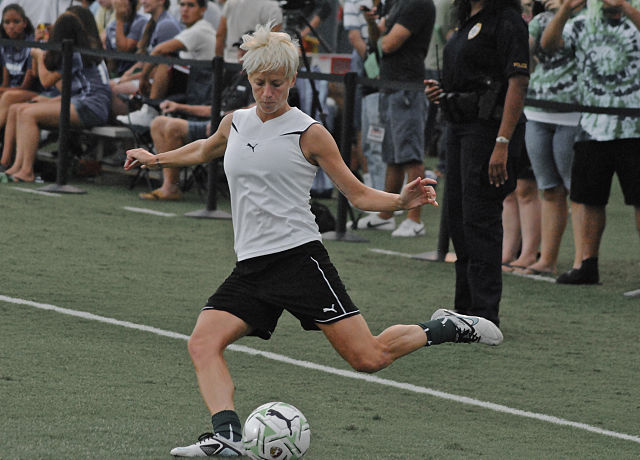 National team experience: 153 appearances with 44 goals scored. During the 2019 SheBelieves Cup, Rapinoe played all but seven minutes and was a co-captain.

What I wrote in 2015: Megan Rapinoe is a world class playmaker. She has exceptional vision… She seems to know exactly where to put the ball. Her other exceptional skill… is her technical ability to pass the ball to just the spot she wants. In the flow of play, Rapinoe’s approach to playing midfielder is acquire the ball, survey the field, move the ball to the player in the position most dangerous to the opposing team. Rapinoe takes the majority of the more technical set pieces, including corner kicks. Her skill on the ball allows her to be a formidable goal-scorer, especially on shots from a distance, but it’s not her primary focus.

What to expect from Megan Rapinoe in 2019: Four years later and coming of a serious knee injury, everything I wrote about Megan Rapinoe is… still true. She’s a fixture on the left wing, still making herself available for service and doing wonderful things with the ball once she has it. In recent years, she can get slight tunnel vision on scoring instead of applying herself to what is her greater skill of playmaking. I’m going to give her the benefit of the doubt and assume that on the world’s biggest stage, she can put aside her goal scoring ambitions in lieu of contributing to team victories. A less celebrated facet of Rapinoe’s game is her defensive ability. She rarely needs to show it during national team games, but when called upon, Rapinoe can be a determined defender with an impressive slide tackle.

Non-gendered personal interest item:  One of the very earliest athletes to support Coliln Kaepernick’s activism, Rapinoe will continue protesting injustice, racial and otherwise, during this year’s World Cup by standing silently during the anthem with her hands by her sides.