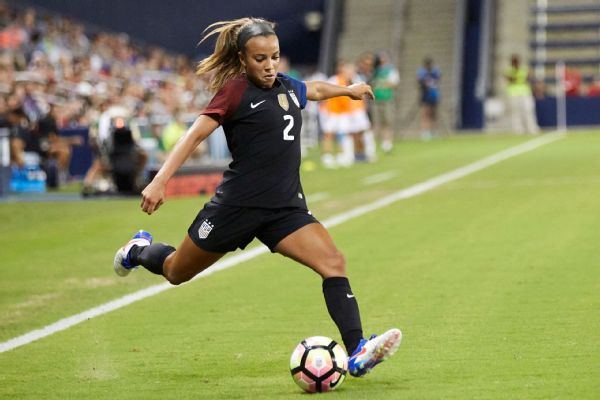 National team experience: Pugh has played 53 games for the USWNT and scored 16 goals. In the 2019 SheBelieves Cup, she started all three games and was subbed in each of them. More recently she has been coming off the bench.

What to expect from Mallory Pugh in 2019: When Mallory Pugh first came on the scene for the USWNT in 2016, she was 17 and seemed like a revelation. She was tiny, preternaturally fast, and seemed like she could more than hold her own at the senior level. It’s therefore somewhat disappointing that at 21 she’s not starting regularly for this edition of the team. This often happens to prodigy-like players who get a lot of exposure early. The truth is, it’s a hard path from 17 to 21, and the weight of expectations and public attention doesn’t make it any easier. Bodies change and take getting used to. What seems like pure fun at 17 feels different when you’re still only 21 and you’ve been doing it professionally for a few years now. Injuries add up and slow your development. Pugh seems to have experienced a little of all of that over the last three years. Her work in progress is currently in a positive state, but it’s that of the first player off the bench as a sub in most games, not as a starter. Her speed and imaginative movement are still noticeable when she gets on the field and it would not be surprising at all to see her spark a come from behind win in a game in this World Cup. There’s literally no shame to being behind Tobin Heath, Alex Morgan, and Megan Rapinoe at 21.

Non-gendered personal interest item:  When Pugh was 14, she broke her femur during a game and was back on the field in FOUR MONTHS. AGHHHHA.

Links: A Bleacher Report article about Pugh, plus her Wikipedia page, U.S. Soccer page, and Twitter.