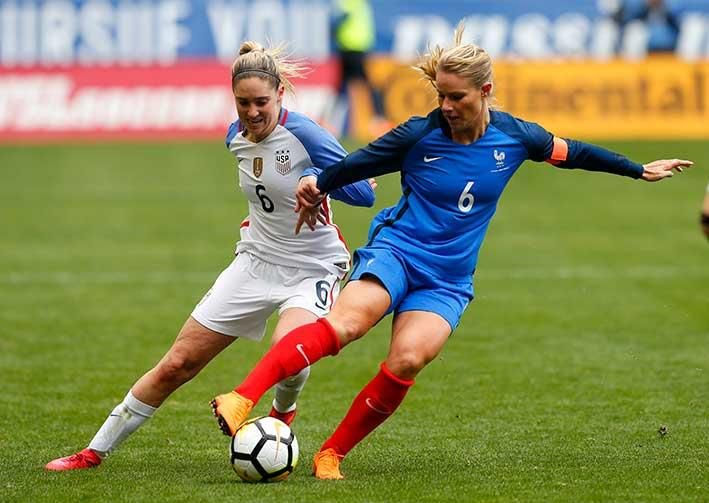 National team experience: Brian has made 82 appearances for the national team and has scored six goals. During the 2019 SheBelieves Cup, she was not on the national team roster. For the last two friendlies of the year, she was on the team but did not get into the games.

What I wrote in 2015: At 22, Brian is the youngest player on the United States team… Although she was a prolific scorer in college, in the context of the national team, she’s played a more defensive or holding midfield position. It’s not a natural fit for someone of her size (5’7″ but so slight that her college teammates nicknamed her, “Plankton”) but she’s more than held her own. When you watch the team, you probably won’t notice Brian, but she’s an essential part of the glue that connects defense to offense and makes sure nothing slips through.

What to expect from Morgan Brian in 2019: Seen as the spark that ignited the USWNT’s run through the knockout rounds of the 2015 World Cup, you’d expect Brian to have spent the last four years solidifying her spot on the team. Instead, it’s been a terrible time of seemingly dozens of injuries that have taken her out of the lineup entirely at times. She’s never regained her heroic 2015 form and is on this year’s team as just one of several midfield options off the bench. Perhaps it was inevitable – one of the team’s slightest players playing defensive midfield, soccer’s most physically demanding position. At only 26, there’s hope for Brian to come back to star in a World Cup again, it just won’t be this one.

Non-gendered personal interest item:  As per her US Soccer page, Brian “grew up in Georgia on St. Simon’s Island, a tiny island that is three miles wide. When she worked on fundamentals in her driveway, she’d trample the crabs that crept up out of the marsh.” Okay, that’s amazing.

Links: An Equalizer Soccer article about Brian, plus her Wikipedia page, U.S. Soccer page, and Twitter.